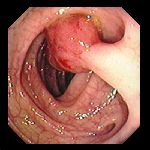 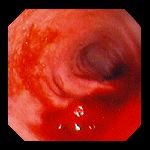 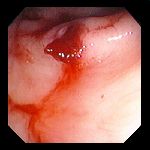 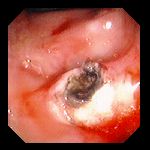 Left: 1 cm benign-appearing polyp on a stalk, which was excised uneventfully using a snare wire and electrocautery. There was no bleeding observed during the procedure.

Left/Center: Four days later, the patient presented with hematochezia. A bleeding vessel was found at the previous polypectomy site.

Right: The vessel was eradicated with a heater probe; there was no recurrence of bleeding. 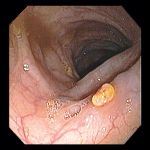 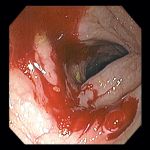 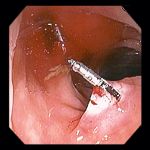 Left: Small polyp in the colon of a 61 year-old man undergoing screening colonoscopy.

Center: Bleeding ensued following forceps polypectomy despite the use of coagulating current.

Right: Bleeding controlled by application of hemostatic clip (whose reflection is seen in the pool of bloody lavage fluid in the upper left portion of the image). 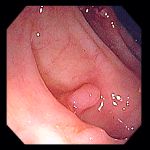 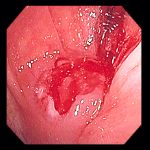 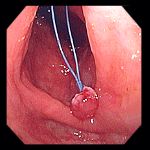 Center: Bleeding ensued following snare polypectomy despite the use of coagulating current. Bleeding did not respond to epinephrine injection.

Right: Complete hemostasis achieved by the placement of an EndoLoop® ligature around the residual stalk. 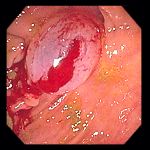 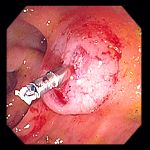 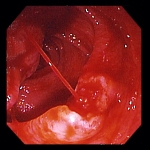 Left: Bleeding ensued following forceps polypectomy with cautery in a 74 year-old woman. Submucosal hematoma formation is evident at the site of bleeding.

Center: Same patient as left; hemostasis was achieved by the placement of a hemostatic clip.

Right: Significant arteriolar bleeding immediately following snare polypectomy in a 67 year-old man despite the use of electrocautery. Hemostasis was achieved by the injection of 1:10,000 epinephrine solution. There was no subsequent bleeding. 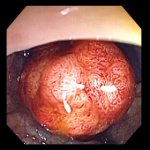 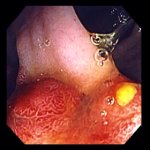 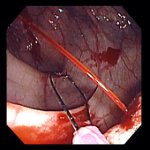 Center: Same patient as left; showing the thick stalk of the polyp.