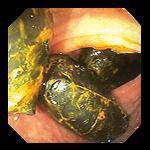 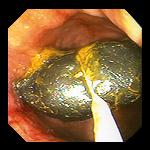 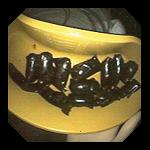 38 year-old man who became unresponsive and apneic at the Atlanta Airport, who was successfully resuscitated with treatment that included Narcan (narcotic antagonist). Abdominal x-ray demonstrated foreign bodies in the colon, which could not be purged with cathartics. Colonoscopy revealed multiple packets of heroin tightly wrapped in plastic electrical tape; packets measured approximately 2.5 x 1 cm. Middle photo shows packet being removed using a wire basket. Image on right shows the first 13 (of 31) packets having been removed. 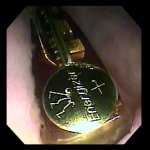 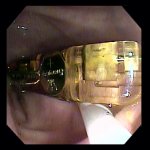 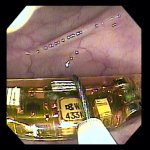 An electronic device was discovered in the cecum of this patient undergoing routine screening colonoscopy. The tip of the device was located within the appendiceal orifice. Post-procedure, the patient provided a history of having undergone a Bravo pH test within the preceding week. 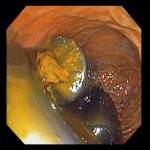 59 year-old man who had become delerious on an airplane and bragged to other passengers that he would soon be wealthy due to his illicit activity, later became unresponsive and was brought to hospital. Narcan induced only transient responsiveness. He was intubed and admitted to ICU. Drug screen was strongly positive for narcotics. Abdominal xray suggested multiple gastric foreign bodies. As shown here, upper endoscopy had enabled the removal of 55 narcotic packets, measuring 4.5 by 1.5 cm each. Unfortunately, a post-endoscopy xray demonstrated additional foreign bodies further along in the intestinal tract. Once CT scan indicated that the additional packets had reached the colon, colonoscopy was performed despite his deteriorating status. Eight packets were found in the distal colon (see photo), and several had been extracted when he suffered a cardiac arrest during the procedure, from which he could not be resuscitated. 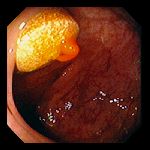 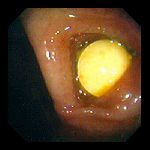 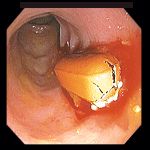 Center: Tablet lodged in the orifice of the appendiceal remnant, in a 70 year-old woman who had been taking a variety of vitamin and mineral supplements. The tablet was dislodged into the cecum using a forceps.

Right: Mesalamine tablet noted at colonoscopy in a patient with Crohn's colitis. Bleeding was secondary to colitis and unrelated to the presence of the tablet. 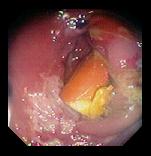 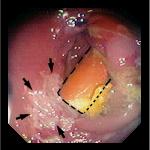 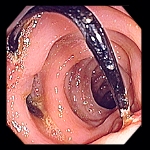 Left: 72 year-old man presented with rectal bleeding. 48 hours earlier he had inserted a 20 cm length of rubber compression hose into his rectum, and was then unable to retrieve it. Sigmoidoscopy revealed the lower end of the foreign body. The surrounding mucosa was inflamed with several ulcers. The object was removed using a snare wire, and the ulcers healed rapidly.

Right: Through-and-through wire suture found entering and exiting the sigmoid colon in a 93 year old woman who was status post hysterectomy and bladder tack-up 40 years earlier. She was undergoing colonoscopy for repeated episodes of bleeding. The bleeding was secondary to diverticulosis, and seemingly not related to the suture which had no visible associated inflammatory reaction. 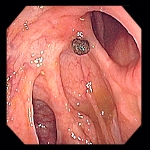 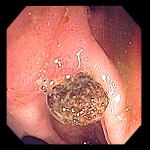 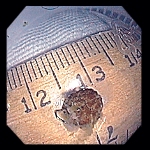 Left: Small concretion adherent to mucosa at the anastomisis in a 72 year-old man who had undergone segmental resection of the colon several years previously.

Right: The lesion had formed on a surgical clip. A portion of the wire clip can be seen protruding from the left side of the calculus.