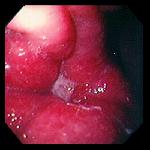 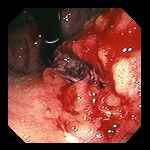 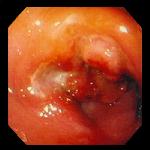 Left: 46 year-old man with no prior gastrointestinal symptoms, presented with five days of epigastric pain. Initial studies revealed iron-deficiency anemia and blood in the stool. Endoscopy demonstrated this lesion on the lesser curvature which appeared to be edematous folds with a central ulceration, but which on biopsy proved to be a poorly differentiated adenocarcinoma, signet ring cell type.

Center: 72 year-old man with hematemesis, with active bleeding from a malignant ulcer in the gastric fundus, seen here at retroflexion.

Right: 87 year-old woman was found to be anemic and to have occult blood in the stool; she had no gastrointestinal symptoms of any kind. Endoscopy revealed this ulcerated, sessile, polypoid mass which proved to be adenocarcinoma on biopsy. 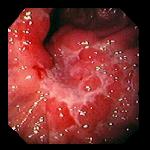 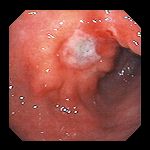 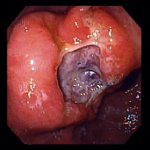 Left: 82 year-old woman who presented with early satiety and postprandial vomiting, suggestive of gastric outlet obstruction, along with weight loss and anemia. Endoscopy demonstrated an ulcerated mass with prominent folds, which did not obstruct the gastric outlet. The lesion was an adenocarcinoma of the signet ring cell type.