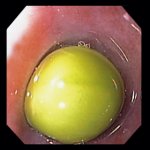 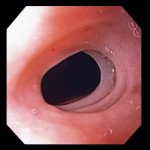 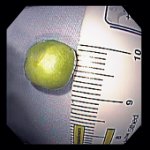 47 year-old woman with a history of esophageal food obstruction 8 months previously, but who had not keep medical follow-up in view of a lack of ongoing symptoms, presented with acute esophageal obstructive symptoms of several hours duration.
Left: Urgent endoscopy revealed an intact pea suspended in the proximal esophagus.
Center: Following removal of the foreign body, a delicate stricture was noted, upon which the pea had lodged.
Right: The pea measured nearly one centimeter in diameter. 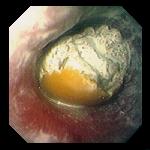 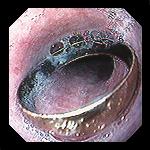 Left: Portion of a hotdog lodged in the distal esophagus of a 63 year-old man with severe dysphagia (difficulty swallowing), which began shortly after a meal 48 hours previously. A barium swallow had been performed, imparting a white hue to the esophagus and the foreign body.
Right: Wedding ring inadvertently ingested by a 102 year-old woman. 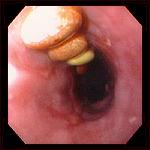 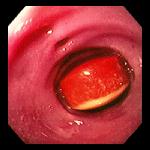 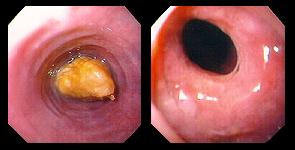 71 year-old man with esophageal obstruction by a meat bolus impacted in a lower esophageal (Schatzki) ring. The ring is seen on the right after endoscopic extraction of the food bolus. 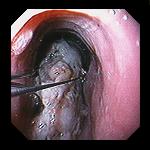 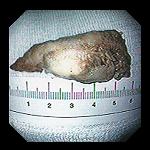 Extraction of a large, obstructing meat bolus from the esophagus of a 41 year-old man, using a tripod grasping forceps.